A Novice View of Linux

The purpose of this workshop is to outline the common areas between Windows and Linux so that you will see, as I did recently, that operating Linux is similar to Windows other than some of the places you would go to find a particular item differs and may have a different name. Linux is not something to be afraid of, in fact it is quite straight forward.

I found initially I was, as it has turned out quite stupidly, intimidated by the strange names given to various versions of the open source Linux operating systems, such as Crunchbang, Debian, Mandriva, Mint, Slackware and Ubuntu, to name just a few. Don’t be put off by these names because it is surprising how quickly you become used to them.

It’s a matter of personal preference which version you chose to use but I am going to refer specifically to Ubuntu 9.04 for the rest of this workshop. Note that in that version no. 9 represents the year of issue 2009 and 04 tells us it was released in April of that year. A pre-release of what will be version 9.10 is available currently. This can be tested on your PCs or Laptops directly from disc. However, we recommend you do not select install at any time since this will most likely wipe your hard drive clean before installing Ubuntu, unless you have partitioned your hard drive correctly. The only way in which you can have Windows and Linux operating systems installed on the same disc is to partition the disc and have Windows in one partition and Linux in another. Unlike Windows Linux can be installed in about half an hour by yourself.

When you first boot up Ubuntu you can if you wish arrange to be presented with a security check where you enter your Username and Password. Once entered you are very quickly taken to the Ubuntu desktop. Alternatively, you can set up a guest account where you will bypass the security check. 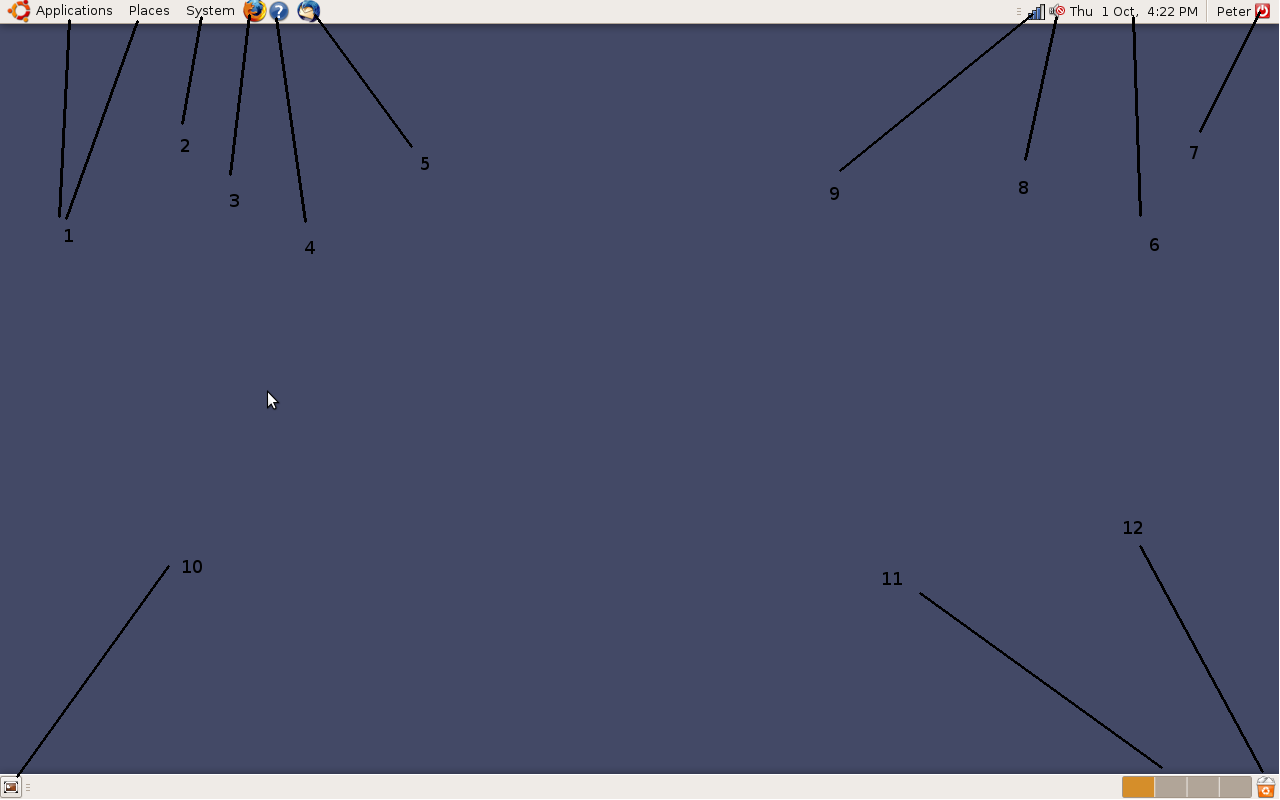 The first thing you will notice when viewing the desktop view above is that there is no apparent START menu or Control Panel. However, the START menu is to be found at the top left hand side of the desktop represented by the APPLICATIONS and PLACES menus 1. Click on APPLICATIONS and a menu appears giving general headings so that you can quickly go to areas you want. Click on the heading you have chosen and a menu appears with all the programs relevant to that general heading so that you can quickly chose the program you want without having to search through all programs as in Windows. If you don’t like this arrangement you can if you wish move the tool bar along the top of the screen to the left, right or bottom of the screen. To do so right click on the tool bar and select Properties. Click in the box adjacent ORIENTATION and select where you want the tool bar to appear. Click Close.

At the bottom of the general APPLICATIONS 1 menu you will find an ADD/REMOVE utility. If you wish to download a program you can simply put a tick in the box next to it and click download. There is no need to search for a download site as you have to do in Windows.

If you want to keep icons on your desktop for your favourites then simply right click on your favourite and select “Add this launcher to desktop/panel” as you require.

You will find Popular Linux folders such as the Documents, Music and Picture folders under the PLACES 1 menu. Each of these folders open up into windows similar to those found in Windows Explorer and you can copy and move folders/files in the same way as in Windows. In fact most of the commands and keyboard commands used in Windows can be used with Linux. For example:- Ctrl + c will copy Ctrl + v will paste Ctrl + s will save Ctrl + p will print Alt + F4 will close an application Alt + Tab will allow you to switch between applications.

Advantageously your Linux operating system will allow you to read your files which were backed up in Windows. One big advantage of installing Ubuntu is that Open Office is automatically installed for free. Open Office includes the equivalent of Word, Excel and Power Point. The equivalent programs are called Open Office word processor, spreadsheet or presentation, respectively.

The biggest difference between Linux and Windows is in the file system. The search for files utility is very impressive in Linux because the Linux operating system indexes all files making file searches in Linux much faster than in Windows. For example, typing re would highlight a file called report.doc if it is in the file you are looking at.

Returning to the desktop the SYSTEM Menu equates to the Control Panel. Click on SYSTEM 2 and you will find two main headings Preferences and Administration. Preferences deal with user settings such as mouse, printer and display configurations. Under Administration you can change more complicated settings. However, it is possible here to unduly affect the working of your computer. Therefore, a safeguard is provided by requesting your password before making any such change.

In the tool bar along the top of the desktop, next to the word SYSTEM, is an icon 3 for the Firefox web browser which comes with the Ubuntu installation. Next is found a help button 4 and then an icon 5 for whichever email program you chose to use. I have installed Thunderbird which I find works very well.

A separate workshop on the installation of Thunderbird can be found by clicking the link Thunderbird .

The date and time 6 are displayed at the top right of the desktop and when you click on the date a drop-down calendar appears. Next to the time display, to the right, the small icon 7 when clicked gives you the opportunity to switch off, restart, hibernate, log out or lock the desktop. To the left of the date is a volume control 8 and to the left of that 9 an indication of the connection to the internet.

Along the bottom bar of the desktop, taskbar buttons work just the same as in Windows. In addition the icon 10 at the far left of the taskbar allows you to hide all displayed applications. The recycle bin 11, called the wastebasket in Ubuntu, is not situated on the desktop but at the bottom far right of the screen in the taskbar. Deleting files works the same way as in Windows so clicking on the recycle bin will reveal the files to be deleted. From here you can remove the files from your computer to save space.

I am reliably informed that Ubuntu supports 255 different screens although here there are only four. Look just to the left of the recycle bin where you will see four empty boxes 12 with one highlighted. The highlighted one represents the desktop illustrated at the top of this workshop. If you click in the next box you will see the screen rotate to display a second screen. This will enable you to use a different screen, if you wish, for each program you have open. Alternatively, the screens can be rotated by holding down the Control and Alt keys while pressing the forward or back keys.

In spite of the differences at the core of Linux and Windows, these two systems share many desktop features. The icons and menus may be arranged differently but once you have learned to use one desktop system those skills can be transferred quickly to another.

I hope this workshop has shown you that Linux is not a system you should be afraid of but is easy and fun to use. More importantly, Linux is more stable and secure than Windows, is clearer in sound and vision, operates faster, includes Open Office and is completely free.

Finally if you wish any further information it is recommended you contact the SOSLUG club whose website is of course www.soslug.org .There is plenty of information on this site or you can arrange to speak to any of the more experienced soslug members who are available to answer any questions you may have. On the SOSLUG site I would direct you to the section “Linux for Novices” and the articles “Twenty – four Reasons Why You Should Use Linux” by Delboy dated 12/04/2008 and “Linux for Novices” by Paul dated 15/07/2007. Otherwise, particularly for novices, I recommend a copy of the Ultimate Guide to Using Linux which can be ordered on line from www.computeractive.co.uk.